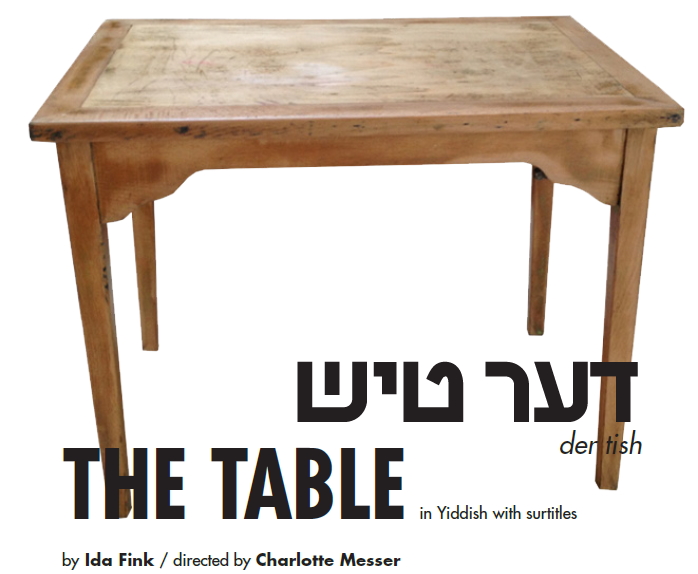 ”Der tish” (in Yiddish with supertitles)

In a small town in Poland during the war hundreds of Jews were massacred by the Gestapo. Twenty-five years later, a public prosecutor gathers the testimony of four survivors in order to identify and charge those responsible for the crime. But will this be possible? Who actually saw what? What evidence can the witnesses bring against the criminals?
Presented in the form of four successive dialogues, the play attempts to bring us closer to the ineffable.

The Company Troïm Teater (Dream Theater) was born in 2001 as part of the cultural activities of the Paris Yiddish Center (Maison de la Culture Yiddish – Bibliothèque Medem). It is now the last French theater troupe that works completely and exclusively in Yiddish. This company, directed by Michel Fisbein, was created by Charlotte Messer, who holds a graduate degree in theater from the University of Paris III, and Alexandre Messer, both committed Yiddishists.

The Troïm Teater is a troupe whose prime objective is to spread knowledge and appreciation of Yiddish theater in Yiddish. The plays presented until 2014 are adaptations of works by Avrom Goldfaden (1840 – 1908), Sholem-Aleykhem (1859 – 1916) and Haim Sloves (1905 – 1988). In 2014 Boris Sandler, a contemporary Yiddish writer, adapted one of his short stories as a monologue for one of the members of the troupe.

In 2017, for the 70th anniversary of the publication of Le Petit Prince by Antoine de Saint-Exupéry, the Troïm Teater presented an adaptation in Yiddish directed by Amos Oren, a young Israeli director.

Der Tish, by Ida Fink, is the eighth production of the Troïm Teater. The play, written in Polish, was translated into Yiddish for this occasion.